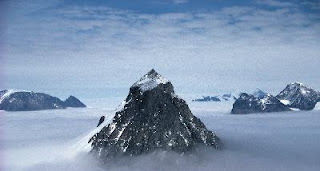 Chances are slim that you will find yourself on a stroll in eastern Greenland. After all, it is a bleak cold landscape covered by an ice sheet. In fact, this ice sheet is so thick that you would be strolling at high elevation and be further hampered by thin air.
If you did just happen to be plucked down there though, the only features you could use to orient yourself would be occasional rocky outcrops that protrude above the ice line and provide a relief against the white monotony.
These protrusions, some as small as boulders, are called nunataks and provide just a hint of what is under the ice you would be walking on: whole mountains kilometers high.
The concept of the nunatak is not that different from the "tip the iceberg.” In this case, however, the “tip” is part of a large, interconnected mountain range, and the “ice” is the enveloping medium. Yet, given the difference in scale, it is ironic that more is probably known about icebergs than these mountain ranges.  You can go online these days to get live positioning of icebergs, but if you look at a map of Greenland today all it shows is ice, rather than the actual geologic features of the earth.

View Larger Map
Don’t you want to know what the features of the largest island on the planet are?


I guess there are practical considerations to displaying the topography as ice though. After all, if you do take that stroll there, you will be walking above the valleys and ridges not trudging up and down them. Furthermore, from a hazard point of view, none of these mountains will sink a Titanic or clip an airplane. Nonetheless, the fact that there are very solid shapes and spaces under the ice provides an alluring mystery, and, as a concept, is a good starting point for this blog.

In this blog I intend to write loosely about 3 topics, and in the process hopefully increase you appreciation of geology:
1.            The aesthetic allure of topographies
2.            The relativistic nature of comprehending and internalizing these topographies.
3.            The processes and timescales involved in the their creation
Of course, it is hard to talk about one of these points without addressing the other. If topography is often not just in the eye of the beholder, but in the mind of the beholder, how can one have a meaningful aesthetic discussion?
In the not-so-subtle example of Greenland, one person might view the topography as ice littered with boulders, another might erase the ephemeral ice from the picture and focus on the erstwhile hidden solid mountainous landscape of the island, whilst a third might erase the mountains from the picture and be interested in seeing the flow, shape and relief of the ice sheet in isolation, as if it were a cast or mold. (In this case, the nanatucks would simply be holes in the ice leading to vast chambers).
While not so obvious, there are countless examples of “hidden” topography on earth (and surely other planets) that bare similar interest. In exploring them, we can also delve into the interesting geologic processes that created them.
Posted by Unknown at 7:51 AM